Huge news for fans of the show! Mom and Dad have made up and are going to finish writing The Souls of Her Feet!

Collaboration is hard. Being an artist is hard. Thinking about doing something in a BIG way when you feel like a NOBODY is really, really hard. But we've both been doing a lot of growing up in the seven (yes, SEVEN) years we've been collaborating, and have worked out a lot of our personal and professional kinks.

Long story short: Michael and I haven't seen each other since our "Couch Reading" in March of oh-nine. We did a rewrite of the script afterwards, and then he returned to the East Coast and we both got busy with other stuff. Last week we had a huh-youge and cathartic email fight, and cleared the air for a Skype session today, in which apologies gave way to the joy of re-claiming a long-term (and fundamentally functional) relationship.

Michael got down on one knee and held up a bottle of Adderall (in lieu of a bouquet of flowers), and asked me to take him back as a writing partner. I grinned and stammered and blushed and agreed.

Friend Of The Musical (FOTM) Ana N. was the first to know, since she beeped in at that moment. She said, "Oh, goody. Does that mean you get to have make-up writing?"

It's always a delight when people bring me offerings. I have a basket-full of shoe-themed notepads, napkins, and cookie cutters. I love that when people see shoe tchotchkies they think of Harry's lecture to Ashley.

But nothing prepared me for the sight that beheld me when I finally stripped through the nineteen protective layers of packing tape that surrounded a custom-cut box from my amazingly creative girlfriend (and mutual muse) Rhonda Bryce.

Fourteen exquisite, tiny designer shoes, mounted on a mirror, suspended by a big, pink rose that looks just-picked. Rhonda had been dropping hints for months about a present she was making for me... the suspense finally ended when I got the most elaborately packaged surprise in the mail.

Thank you, Rhonda! Your gift sustains the spirit of this story as it waits, like a princess by the window, for some interesting change to come. 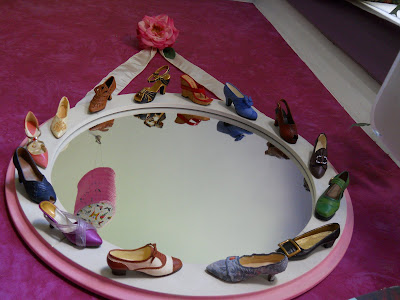 Rhonda, please enjoy the music! (There's a little link to the lyrics too.)
Posted by Krs10 at 2:01 PM No comments:

My How Things Change.

It's been a long dry spell for the musical.  Life seems to have had other plans for Michael and I. Michael is now touring the U.S. with a company as music director, after having written many more songs for many more artists. I went and wrote a book, and now I'm working on the sequel.

As soon as I'm done, I promise, the girls will be back in action.

I now hope to bring Shoes, a Mirror, and a Big Pink Rose to life slowly as a community project entitled, perhaps, The Patchwork Princess Project. The first phase will be a competition/collaboration between local high school drama departments, with each one of them performing a song from The Souls of Her Feet. This will be an interesting way to workshop the musical, create a buzz, expose the novel to youth, and have fun!

This spring, I will be building an advisory board and finding a local theater to sponsor the project, as well as completing the novel. The project will take place in 2012.

The second and third phases of the project will involve college drama departments to workshop Mirror Imag(in)e, and local theaters to workshop The Number the Beast, respectively, in following years.
Posted by Krs10 at 4:59 PM No comments:

Newer Posts Older Posts Home
Subscribe to: Posts (Atom)
Note by note, line by line, act by act, a musical trilogy about three young women with princess-like problems is dancing into this world.